What about Gloria Vanderbilt's multi-millions?

Anderson Cooper has publicly made it known that he will not inherit any of his mother's estate and that he never expected to. Anderson explains that from a young age, he was told that once he turned eighteen that was it.

Anderson Cooper and his mother did do one thing that is more valuable than the wealth itself. If he had been a trust fund baby or if he had stood to inherit a windfall, his life as a journalist may not have never happened. Anderson also probably would have never made the documentary of conversations between him and his mother.

Who is Gloria Vanderbilt?

Gloria Vanderbilt is the last heir of the Vanderbilt family. A family that played a major role in the development of the transportation infrastructure of this country in the first part of the 20th century. They were a part of the Gilded age, transforming America from an agrarian society to an industrial society. As an infant, little Gloria was the center of a bitter custody battle which pitted her mother against both her grandmother and her nanny. Throughout her youth Gloria was tabloid fodder for the press, and as the subject of "the poor little rich girl" story, she was front page headline material. From the time she was born, her life was in constant turmoil and yet, she held fast as an eternal optimist, always looking toward better days ahead.

What is true in most families?​ 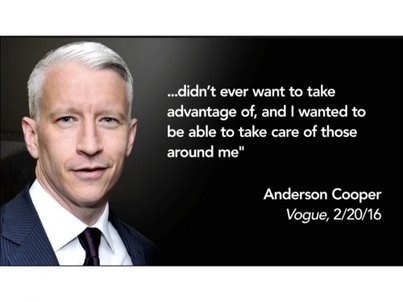 When Anderson Cooper said on the Charlie Rose show, " That he did not feel connected to the Vanderbilt side of the family and had a deeper connection with the Cooper side." This is very true in many families. It was true in my family. And watching Charlie Rose talk with both Anderson Cooper and his mother Gloria Vanderbilt about their new movie " Nothing Left Unsaid." brought it home to me.

There is a deep connection that you can feel between son and mom. Anderson was the son of an heiress of one of the most influential families in American history; a family which has impacted our country for generations. Surprisingly, Anderson did not want to let anyone know who his mother was. Was he ashamed? Angry? So, why did he want to make a film about he and his mother? Yet, the film was something Anderson wanted to do before his mother passed away. 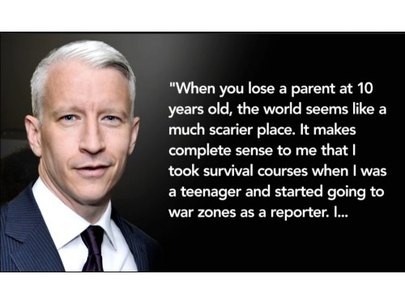 Anderson makes a point so relevant in today's world. He says that everyone should sit down and have a deep conversation with their parents and dig deep. In a world where communication is now ubiquitous with devices keeping us connected 24/7, there is sadly, more than ever, a dearth of human connection and lack of communication.
There is a void bigger than ever in simply understanding and knowing one another, even those closest to us. The screen of a phone or laptop cannot take place of sitting and talking, in intimate conversation, without interruption, attention on the other person.

A conversation between an adult child and a parent can pull us closer together. By digging deeper, we can find answers to questions that we have always had. Gloria Vanderbilt is the last Vanderbilt in the family. It was fascinating to hear, from the women who was dubbed " the poor little rich girl" by the press that she always felt like an imposter.
Imposter is not a word you would think to hear from a lady who came from one of the world's wealthiest families.

This is the whole point of StoryWill – digging deeper into the well, to bring to light the lost connections; to learn our similarities and understand obstacles and reasons. So that we may be the product of all our family brings to us and not lost to misunderstanding or our own ignorance.

Anderson has it right. The opportunity to sit, talk intimately, and document the experience leads to questions answered, insights into who we are, and is a priceless experience more than money itself. Money can always be made but establishing a deeper connection is priceless.

Traits for Success: What question started it all?
Why reverse engineer PT Barnum’s success!